I’ve shared before, but I can’t shout loud enough how much I love our Peloton bike. It is hands down, one of the best purchases we have ever made. I have to admit, when hubby first brought up the idea, I wasn’t sure we would ever get the value out of it. Boy, was I wrong!!

I love the convenience of the bike. Most days, I can find time to get in a 45 or 60 minute ride early in the morning, but for those days where we have an early play date or Lou has to head into work early, it’s so nice being able to take a short 20 or 30 minute ride while Ryder is napping or after he’s gone to bed. Getting ready, packing gym bag/diaper bag, driving to the gym, getting Ryder settled in Kids club – all together take longer than the workout itself and all these nuances give me the perfect excuse to avoid going in the first place. With the Peloton, it’s literally sports bra on, hair up, clip in, go! 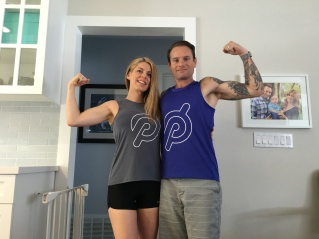 I love that Lou and I have another “thing” we do together. It’s funny that the meaning of Peloton is a pack who ride together and that’s exactly what it feels like – we ride together. We don’t ride at the same time, but we may as well. We are both passionate about all things Peloton – the bike, our numbers, the community, the boutique. It’s really nice to support one another and share the same interest in our workouts. We root each other on and celebrate milestones together (usually with a calorie splurge). It’s also really nice having his support and help in watching Ryder so I have time to ride.

I love the technology of the bike. Our bike is wedged in between our washer/dryer, a rolling rack of Lou’s Ju Jitsu gi’s and our earthquake emergency supplies, but once I turn that screen on and hit play, I’m live, in-studio, in New York, baby! I love the large screen and great speakers  – it really does help get me into the zone. Ryder loves it too! The bike is off limits to him, but on the rare moment he gets near the bike, he loves to watch the screen.

Most of all, I love that it is set up so I can challenge others, challenge myself or just tap it all away and enjoy the class. It’s perfect for someone like me who has different moods on different days. Some days, I want to be the best in the class (ok, this hasn’t happened yet. I’ve made it to the top 1/3, which technically makes me like a B- student rider). Some days, I don’t care what anyone else is doing; I’m just proud I made it on the bike. Mainly I focus on my own progress and have found that to be my biggest motivating factor. Seeing my total output for the same length ride in the past helps me see where my limits are. It’s nice to have that extra little push when I think I’m giving it my all.

This week, I took my 100th ride!! Peloton allows you to download your workout history with a detailed breakdown of your metrics from every ride. In reviewing my history, I feel so proud of my progress and started to look at some of the comments I included with my ride recap posts and the thoughts I had just after each ride. Thus, I share with you, 100 rides of Peloton:

*I chose to focus on average watts, rather than output or calories to account for various ride durations.

Ride 26 [ Average Watts: 102 ] Three PR’s over three classes in a row. It gets a little bit more manageable each time.

Ride 42 [ Average Watts: 112 ] #summersixchallenge begins. What am I getting myself into?

Ride 43 [ Average Watts: 125 ] How does JJ look like a super model after a ride and I look like a sweaty lobster face?

Ride 58 [ Average Watts: 125 ] Squeezed in a quick ride before heading out of town for a family vacation – 20 minute intervals and arms with Robin – one of the best classes I’ve taken thus far. I wish I could bring the bike on our trip.

Ride 62 [ Average Watts: 85 ] Hannah and Cody should do a musical ride with singing and choreograph.

Ride 89 [ Average Watts: 143 ] Per the advice of the Peloton community, I focused on my average watts rather than upping my resistance/cadence and finally hit 385 output. I wonder if I’ll ever make it into the MF400.

So, there you have it. 100 days of Peloton. I can’t wait to set and beat future milestones and already have my eyes set on the #MF500 club! Hope to see you on the leaderboard!